Thank you, Gary Vaynerchuk – you changed the game 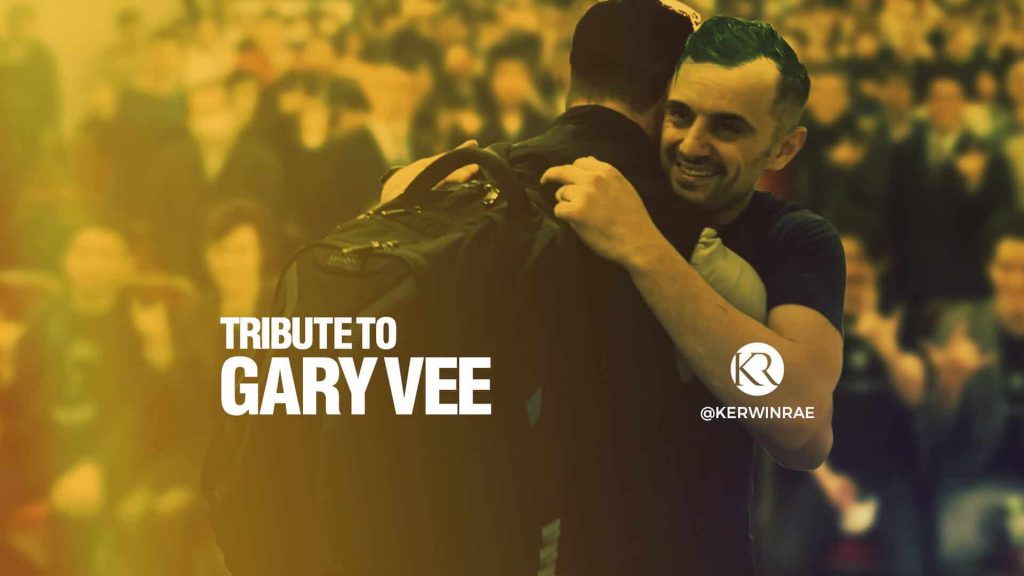 I’ve been so blessed to be able to share my messages with the world and change millions of lives by doing so, but I’ve got to give credit where credit is due.

Sometimes you meet people who are so passionate, and so on purpose and so talented at what they do, that you can’t help but be inspired by what they bring to the world – Gary Vaynerchuk is certainly one of those people.

Like many others, the man has had a profound impact on me. His willingness to share so much has affected millions of people.

So, if there’s one thing I really want to say to Gary it’s, thank you. Because I think we aren’t always aware of the ripples that we make in the pond from the stones that we drop.

Often times, we drop the stone and we might just see the ripple for the first 30 seconds and see it touch the first three people, but we don’t always get to see the 300,000 or the 3 million, or the 300,000 million people that it touches when your back is turned.

Gary, you’ve touched more people than you will ever know.

His messages have affected me not only as a human being or business owner, but how we communicate in the market place, and that’s changed countless lives. We have thousands of messages pouring in from all over the world from people who consume our content, which has helped pull them from the brink of suicide or helped them come back from depression, or leave an unhealthy marriage, or start a business, or get help for a mental illness.

The messages are unbelievable.

For example, I met this guy in Melbourne who got coward hit.

He was king hit and fell into a gutter. He was severely brain damaged, and had to learn how to read, walk, talk, everything again – he said it was the videos we put out that helped get him through.

The guy actually came to see me at a Melbourne event and literally thanked us for saving his life. And I was like, “Dude I didn’t do anything”.

And he said, “You don’t understand, you saved my life. The fact that you’ve had a brain injury before and have still managed to do what you do is the thing that got me through. The fact that you rehabbed yourself gave me the courage to believe in myself”.

I was so in awe of his story that I gave him a scholarship to Nail It and Scale It.

It’s those moments when I hear things like that, that often I think of Gary. Because I’m very conscious of the people that have helped me to get where I am and Gary has played a huge role.

I first saw Gary Vaynerchuck on stage in 2013 at InfusionCon over in the States.

I’d never heard of Gary before, but I was in the main room at the event ready to listen to his keynote and there was such a buzz around his name – people were really talking him up.

Then, this skinny little guy walks in, with a mop of black hair, wearing a white t-shirt that looked like it had been crunched up for days, and honestly, I didn’t know what to expect.

But he walked out and teared up the stage! He was so juiced up, he was like Tony Robbins on fucking cocaine. Within 30 seconds he had me by the balls and I was listening to every word he said. I was completely captivated, which is pretty big for me because I’ve seen a lot of people speak. But I didn’t take my eyes off the guy for 45 minutes.

So yeah, I had a fan girl moment and went off and bought a couple of his books.

A couple of years later we had Gary come and speak at an event we were running in Las Vegas and that’s when I felt the full affects of him first hand.

We were running a lot of promotional content and stealing other people’s quote cards and putting them all over the internet – it’s the lazy man’s way but that’s what a lot of people still do I guess.

So, unsurprisingly when Gary came to speak at our event and we caught up and he gave me an absolute flogging.

It was a fair call, and I came away going, right social media I’m going to crush you!

I came back to Australia and within a couple of months I got a filmmaker, and not long after that we launched the Social Experiment, which is a web-series that takes viewers on a behind the scenes journey of our social media and business growth.

That was in 2015, since then we’ve reached over 450 million people and have made well over $13 million off social media.

I’m not going to lie. It took blood, sweat tears, and a fuck load of money to crack the lid off this baby, but now we have a winning formula on social media.

That’s why we now travel the country doing our Fast Growth Summit Social Media series, because if I can do it, anyone can. And trust me, I’ve been through the trials and tribulations to prove it can be done.

I was completely uneducated going into it though, and in the beginning, most of the information I got on social media and content marketing came from watching Gary Vee videos.

And that’s what I love about Gary, he keeps telling people, don’t listen to what I say, watch what I do. That message rang true to me loud and clear, and that’s what I did. I was constantly reading between the lines and looking at what he was doing across all of the platforms, because he really does have his finger on the pulse with that shit.

Gary is an intuitive encyclopedia on social media and not just social media, he’s got a really solid understanding of personal performance internally. The dude knows how to work hard!

I love that he’s fiercely authentic and real. It takes a lot of balls for people to embrace who they are at such an extroverted level and I think Gary does that really well.

But it just goes to show that when you back yourself enough and have faith in what you’re here to do, you can make anything happen. And the millions of people who you affect by doing that, can also go on to affect millions of people on top of that, and the cycle continues, and that really is the shit that changes the world.

So Gary, from the bottom of my heart, thank you for everything you give.

And for anyone else who’s in business or pursuing a personal goal – keep chasing, keep hustling, and just keep going.

With the internet as accessible as it is, there’s never been easier time to tap into unlimited resources, information and mentors. I have learnt a lot from following thought leaders such as Gary, and you can do the same.